Photo above: The first multifamily retrofit to earn PHIUS+ certification. The Harry and Jeanette Weinberg Commons, completed in 2015, uses 75% less energy than a comparable code-retrofit in the Washington, DC area. Image: Courtesy of Housing Up

As buildings get bigger, efficiency scales along with it

Passive-building principles were originally developed for houses. After decades of experimentation, we have dialed in modeling tools to the point where observed energy use is within 10 percent of expected energy use over the course of a year. One of our first observations was that mechanical systems small enough to heat and cool these aggressive little structures barely existed in North America. Swedish and German mechanical appliances, called “magic boxes,” existed, but their capacities were designed for Germany and Sweden. Unfortunately, they didn’t have enough peak capacity for the more extreme North American climates—and they were blind to our dehumidification needs. Besides, who could read the label?

A passive-house paradox is that larger houses can achieve certification more easily than smaller ones. This seems unintuitive, but it explains why passive building scales up to commercial and industrial so well. The smaller surface-to-volume ratio of larger buildings makes insulating the space more efficient. Not only do small-enough mechanical systems exist on this side of the Atlantic, but the people occupying the building actually serve as space heaters. This can add up in office buildings and multifamily/hospitality applications. 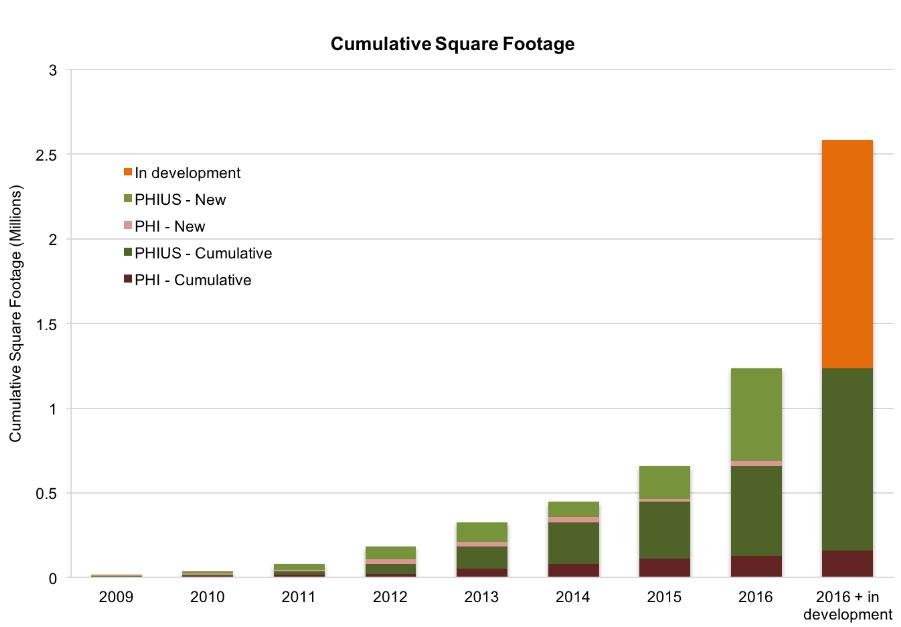 Big growth from bigger buildings. The Pembina Institute says  "The number and size of certified passive building projects has seen a rapid increase in North America in the last five years, and we expect this growth to accelerate."  The number of buildings is on a steady rise, but the area of the buildings is shooting up faster—because bigger buildings are easier to built to PHIUS+ than smaller ones are. Source: Pembina Institute.

Passive building has grown exponentially over the past decade, partly because of how powerful the WUFI Passive modeling software is, but to a larger extent, it has been new business attracted by the economies of scale in multifamily and commercial construction. The project database is full of examples of certified commercial, multifamily, and health-care facilities in all parts of North America.

PHIUS+ certification includes intricate hygrothermal (moisture/temperature) modeling, which is based on local climate and weather data. The models dial in the building envelope to include exactly what it needs to achieve its specific goals—no more, no less. And this leads to another happy paradox: extreme energy efficiency does not always require extreme superinsulation. Many PHIUS+ commercial buildings have wall and roof R-values only slightly higher than code.

The reason that PHIUS+ buildings perform so much better with similar insulation is answered in chapter 1. Continuous airtight insulation with great windows allows a small and efficient mechanical system. It begins with 3D energy modeling to tailor assemblies to their site.

A fundamental truth of building—that new construction is easier and cleaner than remodeling—holds true for passive building too. New buildings are undeniably easier to make perfect than existing buildings because you start with a bare lot instead of a leaky building. Retrofits, however, are positively possible and profitable.

WUFI modeling software can help designers and builders identify issues and opportunities for the retrofit, just as it does on new builds. There are many examples of successful passive-house retrofits in the certified projects database from single-family homes to mixed use to medical boarding facilities.

Successful retrofitting just requires a dedicated—and experienced—team and the motivation to get it right. Because retrofitting is trickier than new construction, an experienced team is critical. It is best not to cut your teeth retrofitting to passive-building standards (though it has been done).

Test the airtightness as construction progresses

The trickiest part of a PHIUS+ retrofit is making the existing building airtight. Multitasking materials, such as spray foam—which insulates and air-seals—can be valuable tools for tightening an envelope, which may be hard to define at first. Using a blower door as often as possible during construction lets you identify holes and leaks when sealing an old building. Blower-door-directed air-sealing drills can also help subcontractors stay focused on airtightness goals.

Adding insulation and airtightness to existing buildings changes the thermodynamics of how the building interacts with its environment. In other words, heat and moisture behave differently than they used to, and the consequences can be both surprising and unpleasant. For example, insulation added to the inside of an old masonry building can cause spalling, subfluorescence, and efflorescence because it changes how the masonry wall can dry after rain.

While retrofitting is more challenging than new construction, it can be rewarding (and tax advantageous) to restore old buildings. Because of the inherent risk involved with unknown thermodynamic changes, we believe the WUFI Passive modeling software is critical to success. In fact, it is central to PHIUS+’s quality-control and assurance guarantee.

1,000 Points of data based on climate science. Data points for over a thousand locations mapped on PHIUS's Data map are coordinated to the IECC climate zone map. When inspectors, planning commissions, or investors ask about codes and standards, you can tell them that PHIUS+ fits like a glove. Climate map source: US Department of Energy

PHIUS+ Is already integrated into North American codes and standards

he move to tailoring PHIUS+ to North America’s extreme climate zones led us to work with some of North America’s leading engineers, architects, and policymakers. We partnered with Building Science Corporation, which had done extensive research through the U.S. Department of Energy’s Building America program to identify affordable, effective energy-saving solutions for residential construction. BSC was excited to work with us on bringing affordability to extremely energy-efficient buildings that are also cost-effective, durable, reliable, and comfortable. This led to the climate map (next page) with data on more than 1,000 locations in North America. These data sets can be fed into the WUFI Passive modeling software.

A side effect of this collaboration and the evolution of climate-specific cost-effective energy solutions is that the PHIUS+ standard closely aligns with North American energy codes and energy efficiency certification programs like ENERGY STAR. Because the International Residential Code, the International Building Code, and the International Energy Conservation Code are based on Department of Energy research, the solutions we developed in the PHIUS+ Passive Building Standards are used for model codes.

For example, the German Passivhaus standard may bump up against city or state ventilation requirements. A similar situation arose in a recent high-profile construction project in New York. The ventilation system did not align with what the building officials expected, so project managers had to obtain a variance from the city. This took multiple weeks and tacked cost onto the project.

In such cases, you may need to obtain variances from city or county officials. PHIUS is aligned with ASHRAE standards and ICC requirements, so getting buy in from local building officials is a much more predictable process.